Let’s try to install and use a simple usecase in order to demonstrate the basic possibilities.

Without going into the very detail, typical GitOps usecases are:

and much more. Further information about the theory behind can be found at https://www.openshift.com/blog/introduction-to-gitops-with-openshift.

In short: there is no reason why not to use GitOps and to leverage tools like Argo CD to manage configurations. In this tutorial, the Argo CD operator gets installed and a simple use case is shown to demonstrate the possibilities of this software.

As for architectural overview of Argo CD, please read the official documentation: https://argoproj.github.io/argo-cd/operator-manual/architecture/, which explains very well the core components. No need to rewrite it here.

You need an Openshift 4 cluster. :)

Watch the video at: https://demo.openshift.com/en/latest/argocd/

Before you begin, create a new project:

In this project the operator will be deployed.

Look for the Operatorhub in the OpenShift WebUI and "argocd" and select the "Argo CD Community" operator. Subscribe to this operator. Just be sure that the newly created project is selected. Other settings can stay as default. 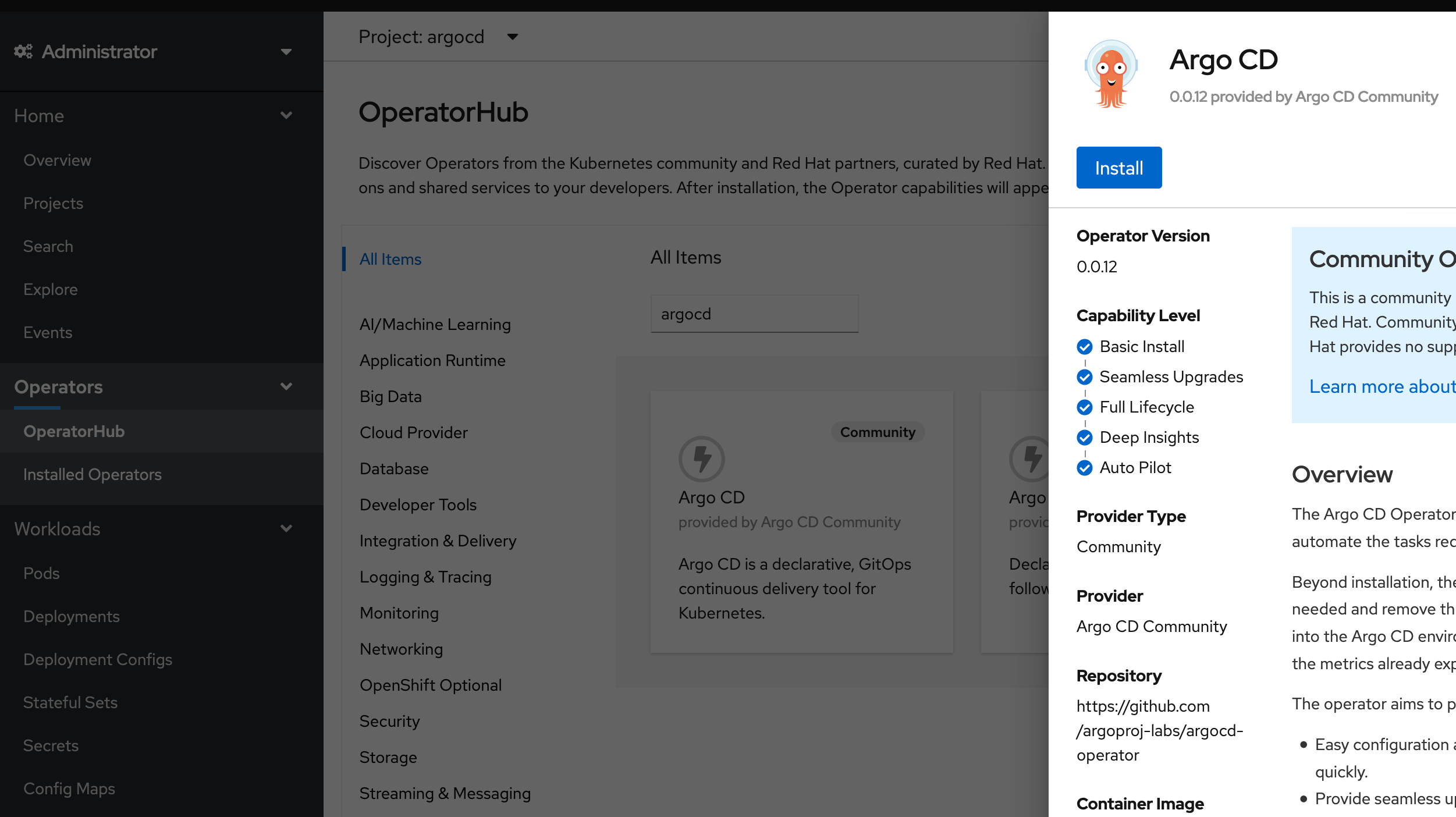 This will install the operator. You can monitor this process by clicking "Installed Operators". After a while it should switch from "Installing" to "Succeeded".

This yaml extends the default example by:

Once this configuration is created, the operator will automatically start to roll out the different pods, which are required. No worries, it will take quite long until everything is up and running.

Create a new group and assign a user to it

In the ArgoCD resource we have defined the group argocdadmins and all users in this group will get administrator privileges in Argo CD. This group must be created and in addition we assign the user admin to it.

For example with the following commands:

Now it is time to login to Argo CD. Just fetch the route which was created by the operator (for example with: oc get routes -n argocd).

On the login page select "Login via OpenShift" and enter the credentials of the user you would like to use. (well, the one which you can admin permissions in the step above).

This will open the Argo CD Interface.

Let’s create an application in Argo CD to demonstrate the possibilities about application management with GitOps. We will use a simple application which draws a blue (or green) box in your browser.

Click on the button "Create App" and enter the following parameters: 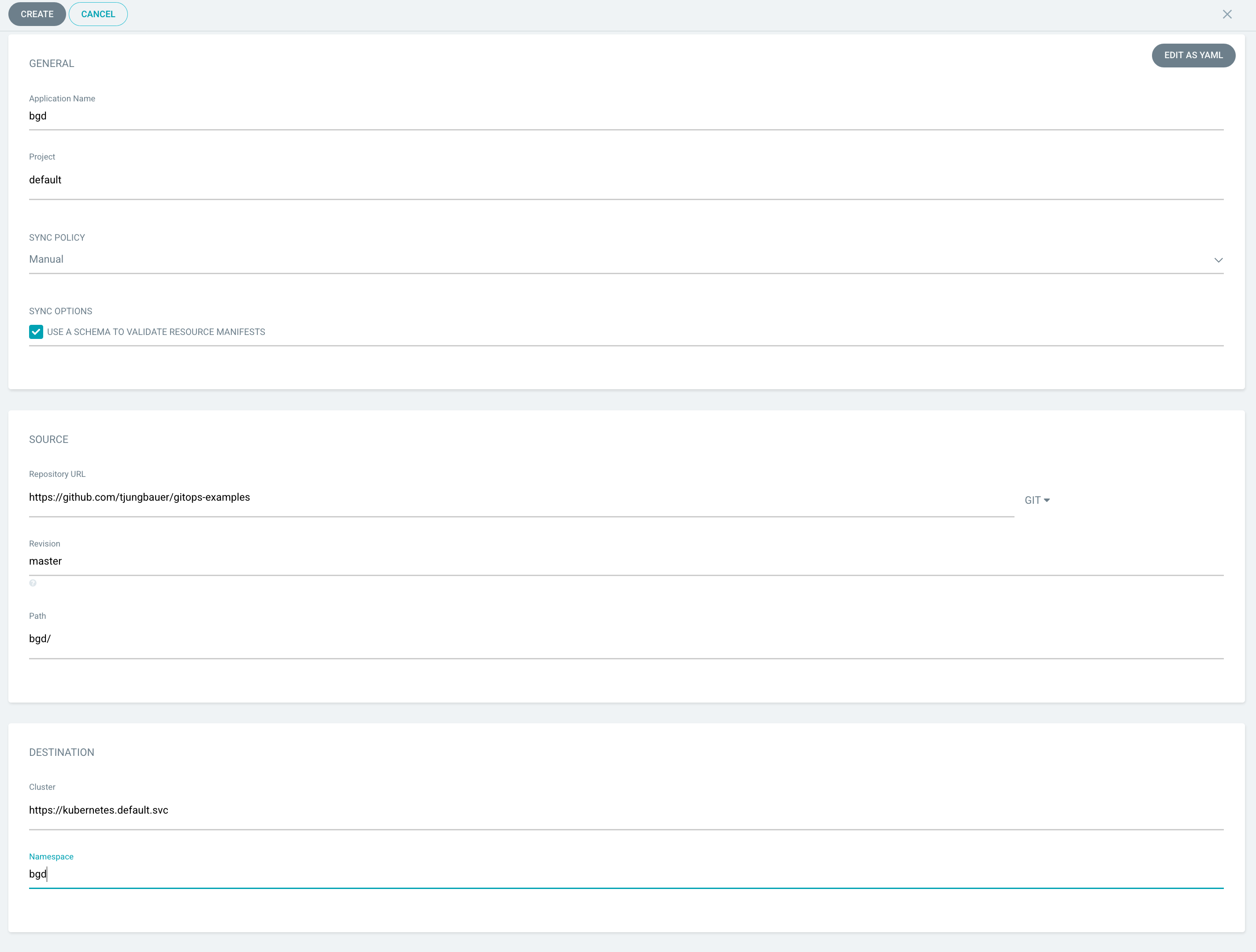 Since we set the Sync Policy to manual, the synchronization process must be started, guess what, manually. Click on the "Sync" button and Argo CD will open a side panel, which shows the resources are out of sync and other options. 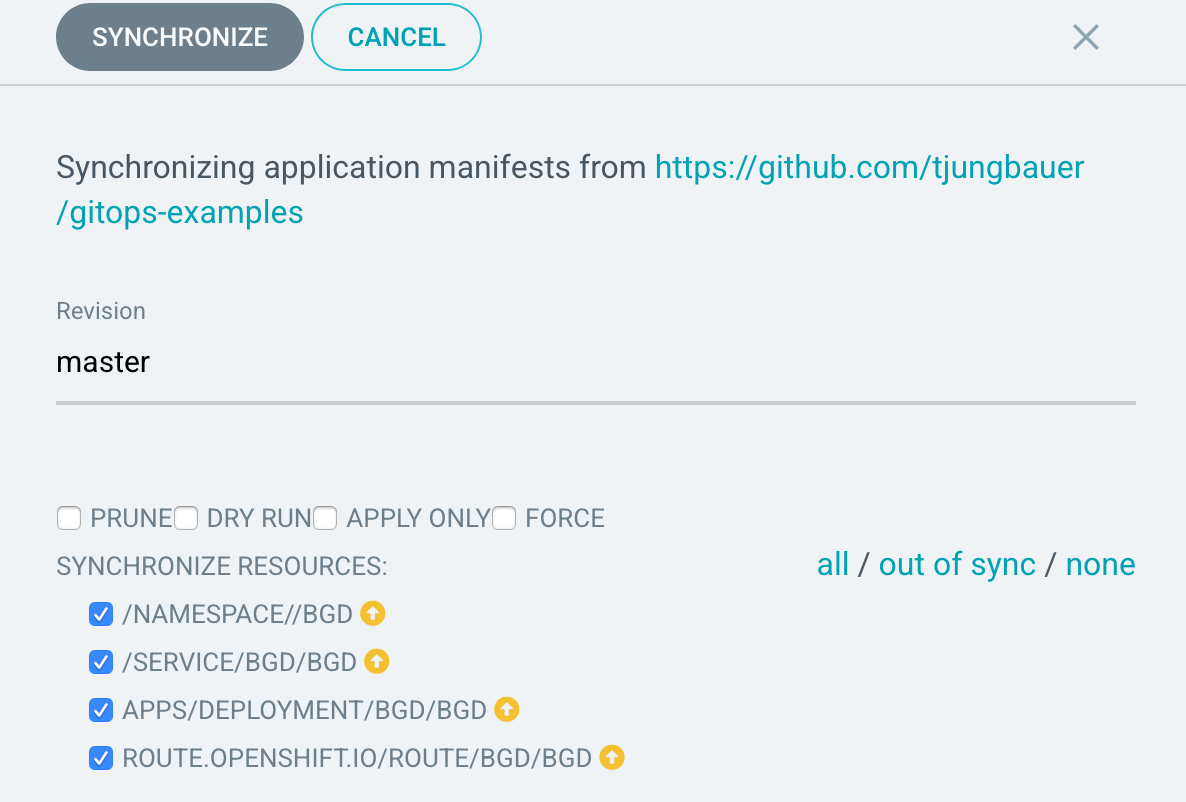 One notable option is the "Prune" setting. By selecting this, changes which have been done directly on OpenShift, are removed and replaced by the ones which are stored at Git.

Press the "Synchronize" button and select the application. As you see the sync process has started and after a while, all resources are synced to OpenShift.

Now that Argo CD says that the application has been synchronized, we should check the objects, which have been created in OpenShift.

As you can see in the Git repository, there are 4 objects which should exist now: 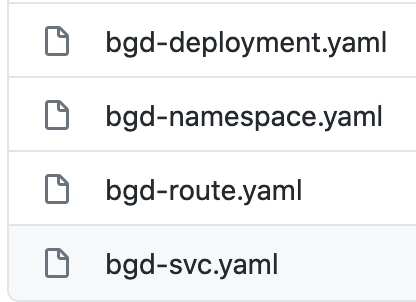 To verify the existence either check via the WebUI or simply try:

Obviously, the namespace exists and with it also the other objects, which hae been synchronized.

When you now open the route http://bgd-bgd.apps.ocp.example.test in your browser, you will see a nice blue box.

As you can see all objects have been synchronized and the application has been deployed correctly. The source of truth is in Git and all changes should be done there.

I want a green box

So you want a green box? Maybe you think of doing this:

Modify the Deployment and change the environment COLOR from blue to green:

This will trigger a re-deployment and …​ fine …​ you have a green box:

But is this the correct way to do that? NO, it is not. Argo CD will immediately complain that the application is out of sync.

When you sync the application it will end up with a blue box again.

But you really really want a green box? Fair enough, the correct way would be to change the deployment configuration on Git. Simply change the file bgd/bgd-deployment.yaml and set the COLOR to green:

Again Argo CD will complain that it is out of sync.

By synchronizing the changes, it will deploy the latest version found at Git and …​ yes, you have a green box now (When deployment on OpenShift side has finished).